Alexis Ohanian- Author of Without Their Permission: How the 21st Century Will Be Made, Not Managed, co-founder of Reddit, internet entrepreneur, and advisor to Hipmunk and Breadpig.

While Chris and I were in our dorm room playing FIFA 2001 on the Playstation2, Alexis Ohanian and his roommate, Steve Huffman, sat in their dorm room a mere 60 miles away working on a website that is now a cultural phenomenon known as Reddit. While Reddit is often called the “front page of the Internet,” or an easy way to waste an entire work day, it is known for its open nature and diverse user base.

After leaving Reddit, Alexis continued his entrepreneurial path and helped launch the travel search website, Hipmunk, and an “uncorporation” named Breadpig. Breadpig is a site that allows for the making and selling of “geek” merchandise, with the proceeds being given to charity. Alexis seems to always be at the forefront of the Internet and he became an Internet activist speaking out against Stop Online Piracy Act (SOPA) and the Senate’s Protect IP Act (PIPA).

In his new book titled Without Their Permission: How the 21st Century Will Be Made, Not Managed, Alexis shares his stories, ideas, and tips for young entrepreneurs who are looking to “make the world suck less.”

This episode is brought to you by Squarespace – the all-in-one platform that makes it easy to create your own website. For a free trial and 10% off, go to Squarespace.com and use offer code smart10. 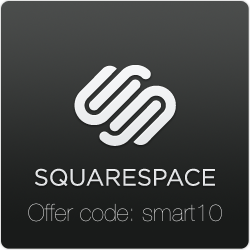